Watford FC ends the season horrendously as they relegate to the Championship. The award night of the Club was held today with players receiving individual present. None of the three active Nigeria player got any award.

The winners of Watford FC’s End of Season Awards were revealed during the Hornets’ final home outing of the 2021/22 campaign, against Leicester City on Sunday (May 15). 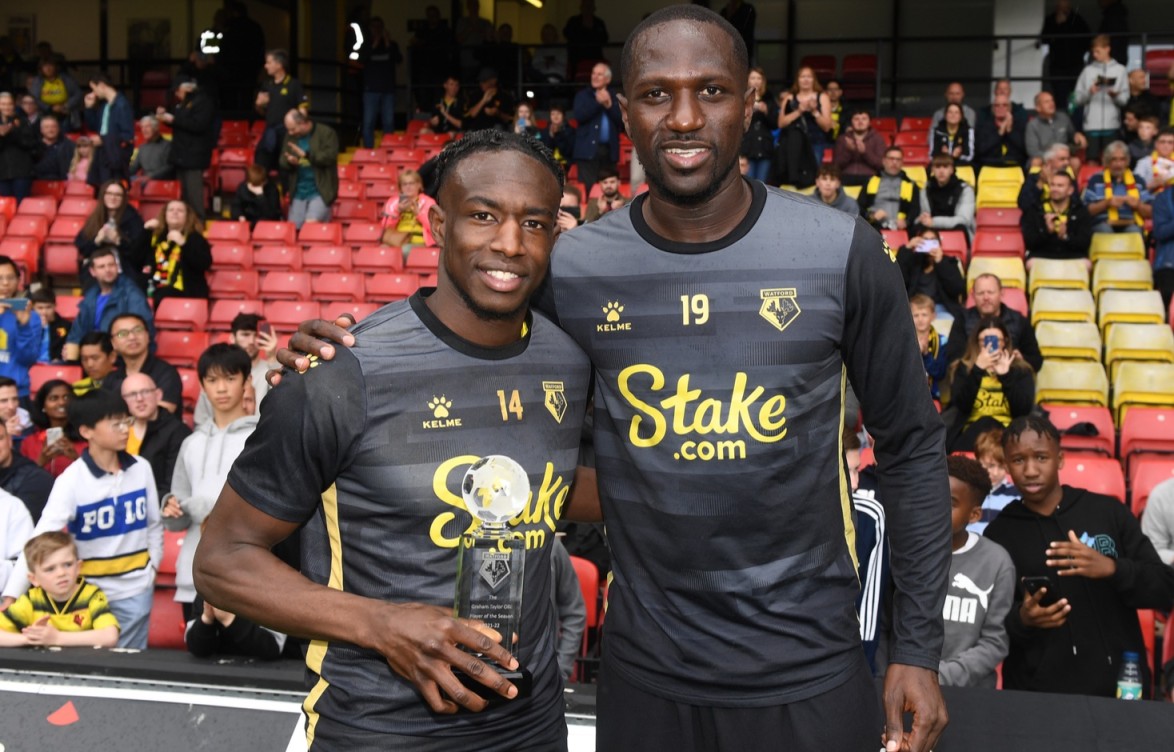 Hassane Kamara is the 2021/22 Graham Taylor Player of the Season, as voted for by Watford supporters.

The Ivorian defender has made an instant impact since signing from French side OGC Nice in the January transfer window, with his committed performances from left-back proving a hit with the Watford faithful at home and on the road.

The 28-year-old made his debut against Newcastle United alongside fellow newcomers Samir and Edo Kayembe, putting in an effective display in a 1-1 draw at St James’ Park. He became part of a defence that kept three clean sheets in six games in February under Roy Hodgson.

Quickly settling in, Kamara has made more interceptions than any other Watford player despite his later arrival, displaying a tireless, high-octane style of play on the left side.

His excellent start to life in the Premier League earned a recall to the Ivory Coast squad, with Kamara playing against England at Wembley in March.

He scored his first goal in a Watford shirt against Manchester City in April, making a tearing run through the City defence, receiving possession and driving a powerful low strike past Ederson.

Kamara came out on top of an online vote for the award, with Ben Foster runner-up and Emmanuel Dennis in third. 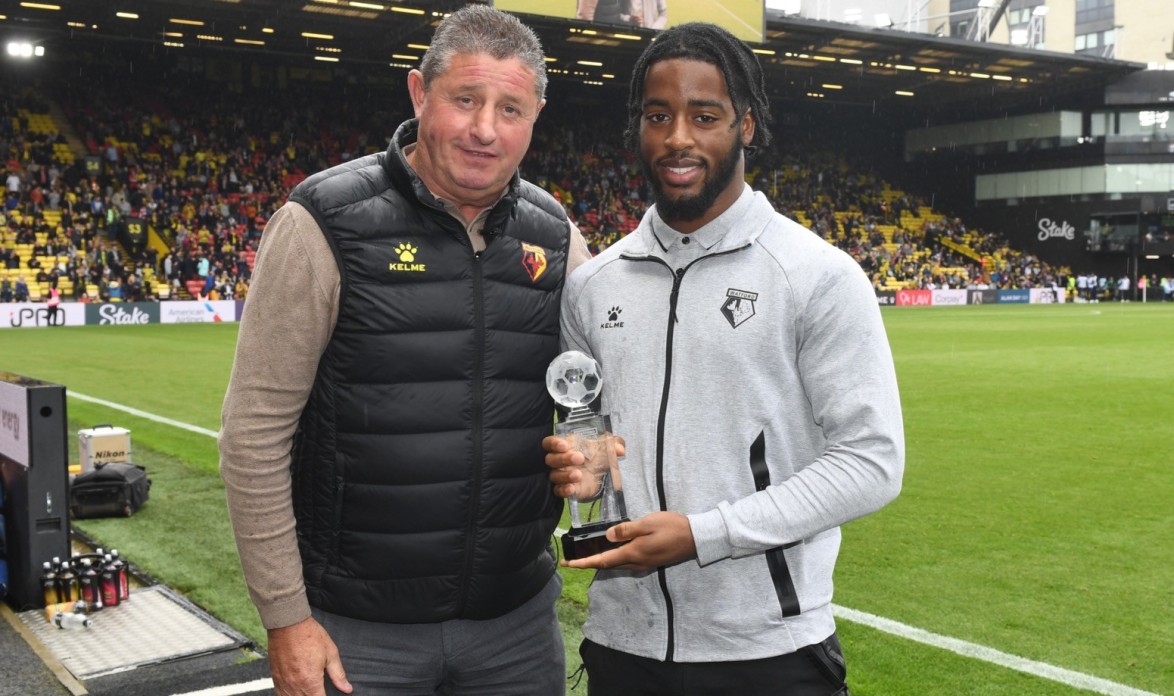 Forde, 18, has experienced a meteoric rise into the first team this season, having started the 2021/22 campaign as part of Tom Hart’s Under-18 side.

Chosen by Academy Director Richard Johnson and Head of Technical Development Jimmy Gilligan, Forde’s work ethic and determination saw the youngster flourish at both Under-18 and Under-23 level, resulting in his first-team debut in the FA Cup against Leicester City in January.

On an occasion Forde described as “a very special day for my family”, the attacker followed in the footsteps of his father, former Hornet Fabian Forde, in representing Watford at senior level, being introduced at the King Power Stadium on 74 minutes.

A loan to Kings Langley followed soon after as Forde continued to get a taste of men’s football, and he scored two goals, made an assist and won a penalty in three games in the Southern League Premier Division South.

Travelling with Watford’s senior squad on several occasions this term, including for a trip to Liverpool, Forde made the bench for the first time in the Premier League against Brentford last month.

Colombian attacker Cucho Hernández has won Watford FC’s 2021/22 Goal of the Season award for his bicycle-kick strike against Arsenal in March.

The 23-year-old, who netted five times in total during the Premier League campaign, including goals against Southampton, Aston Villa and Manchester City, found the target with an acrobatic strike against the Gunners at Vicarage Road.

Emmanuel Dennis laid off for Kiko Femenía on the right flank, with the Spaniard delivering a lofted, out-swinging cross into the path of teammate Hernandez. The former SD Huesca man connected with the pass to find the bottom corner, beating goalkeeper Aaron Ramsdale.

Signed in 2017, Hernández spent his first four years as a Hornet out on loan in his native Colombia and in the top two Spanish divisions. Earning promotion with Huesca to La Liga and later joining RCD Mallorca and Getafe on temporary deals, the forward notably scored against Real Madrid and Barcelona in the top-tier before moving to Hertfordshire and joining up with his parent club.

His opening-day goal against the Villans less than a minute after his introduction from the bench was also a contender for the award, as Hernández enjoyed a successful first season at The Vic, also notching two assists.

Supporter of the Season: Shay Murray
Presented by Rob Edwards 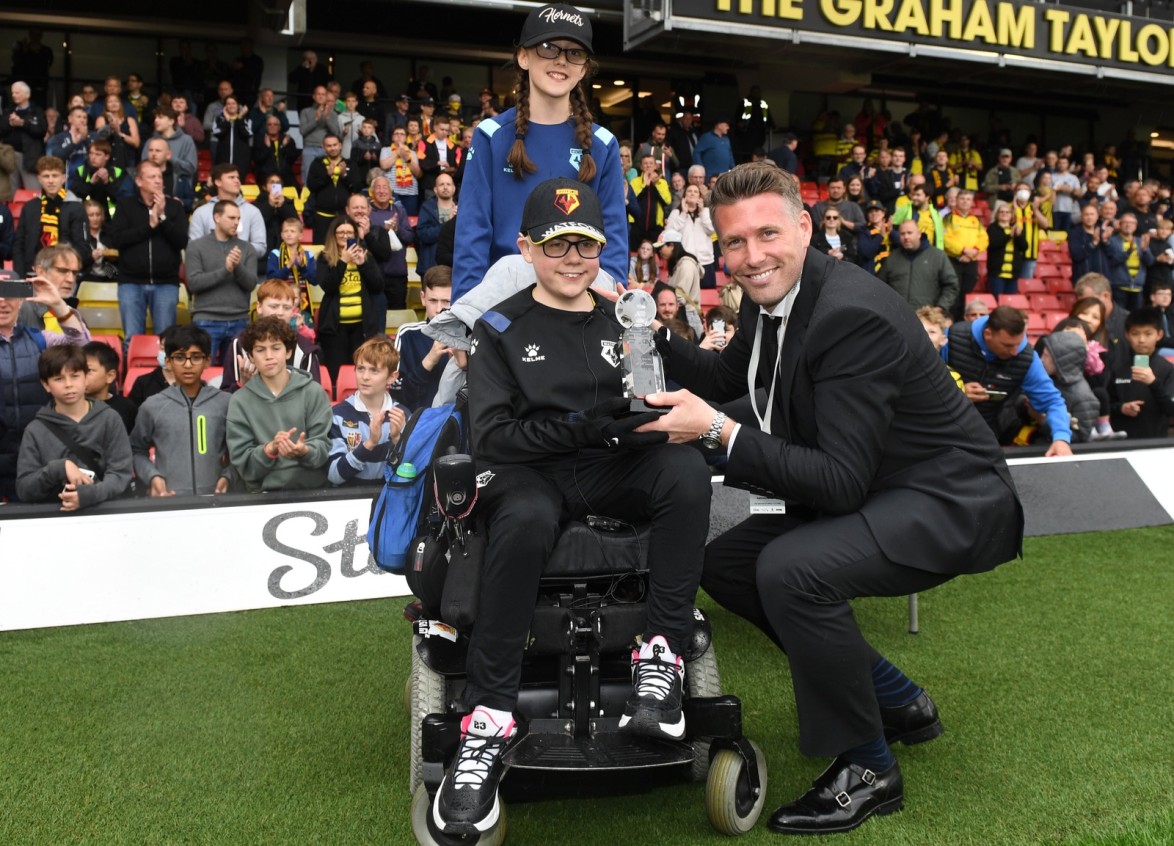 A Rookery Stand Season Ticket holder who attends matches with his dad Alan and sister Cearney, at 18 months old Shay was diagnosed with Pearson Syndrome, a very rare mitochondrial disorder that is characterised by health conditions such as sideroblastic anaemia, liver disease and pancreas deficiency, which will limit his life expectancy.

Despite his disabilities, Shay is a constant fixture at the Hornets’ home matches and has also been a regular supporter of the Golden Boys on away ends for several years.

He can always be relied upon to greet the players at coach drop-off points at stadiums across the country, and at Vicarage Road he is usually found at the front of the Rookery Stand, enthusiastically cheering on the Hornets from the moment they begin their warm-ups.

Shay is a keen power wheelchair footballer and plays for Muscle Warriors, which are based in St Albans.